Before & After: Our Bathroom Renovation 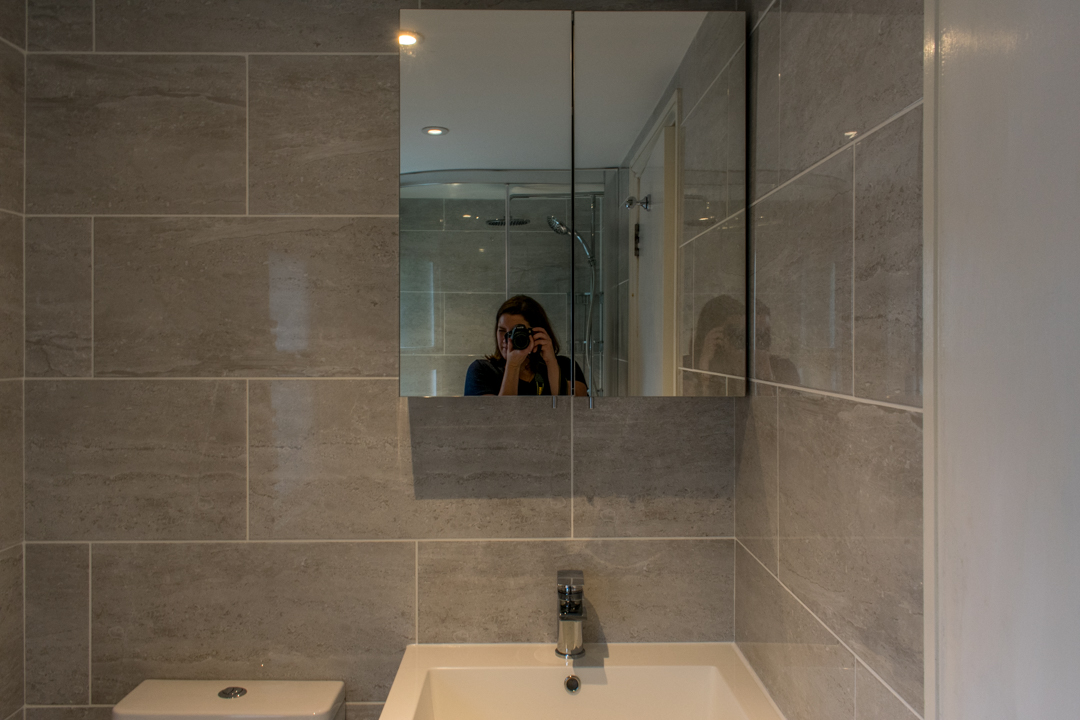 I’ve been meaning to write about our bathroom renovation since it was completed in October, but we’ve been spending so much time just enjoying the fact that we have a decent bathroom (and now kitchen) that I haven’t had the time to sit down and waffle on about it. If you’ve seen me in person, though, or come by our house, you know I almost never stop talking about it! So here’s the deal… We moved into a Victorian conversion in South West London in October 2015. One bed, one bath. And, about two months into living in the flat, we realized that the bathroom was awful. When we moved in, we didn’t foresee any problems, but the paint on the ceiling started chipping, we realized how much we needed more storage space, and the whole room started to feel depressing.

Cue our desperate desire for a bathroom renovation. We decided we would be best off starting from scratch, so we went over to The Bath Store and started designing a new bathroom. Once we designed the bathroom in store, someone came to our house to check that everything would work in the space. Naturally, it didn’t.

Before & After: Our Grey on Grey Bathroom

The moment you’ve been waiting for…the big reveal! Here are the before and after photos from our bathroom renovation. Thanks to our contractor and our friends at The Bath Store, we took a very meh bathroom and turned it into something bright and modern. And we’re obsessed! 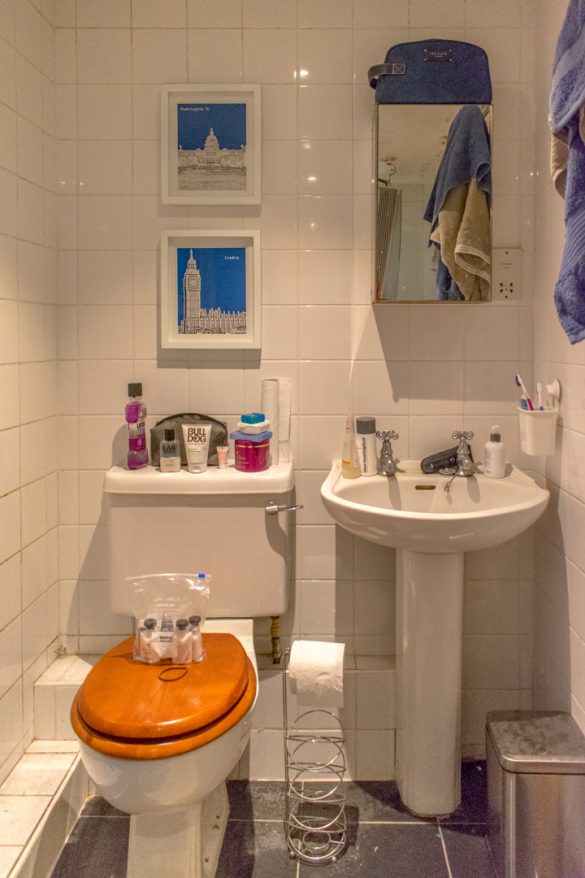 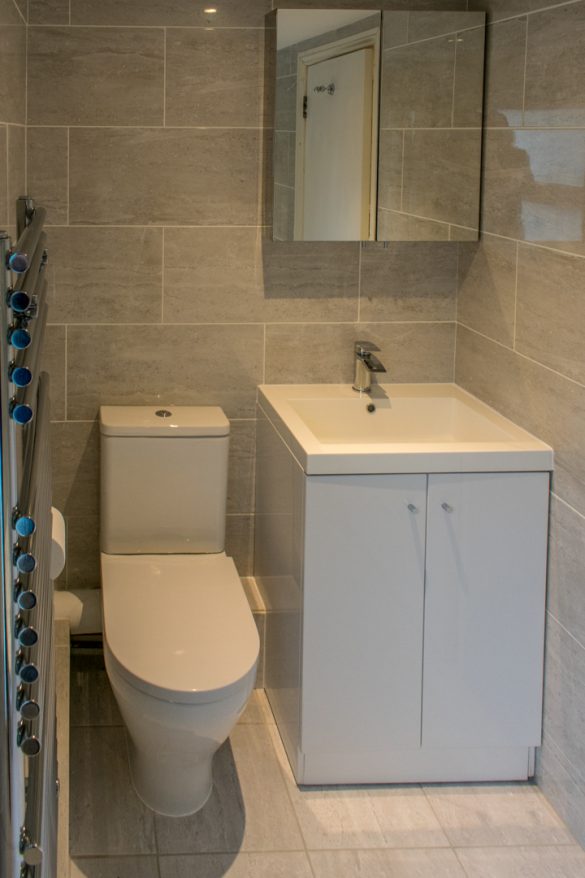 We upgraded our toilet to something a big more modern, and removed the pedestal sink in order to put in something with a cupboard. Our toilet handle was always causing problems, so we’re happy that we now have a button flusher. It’s either much harder to break or we just haven’t figured out how to break it yet, but we much prefer the button flusher! The number one priority with the sink was to turn it from a two faucet sink to a combined tap. No more trying to mix hot and cold weather when washing my face! 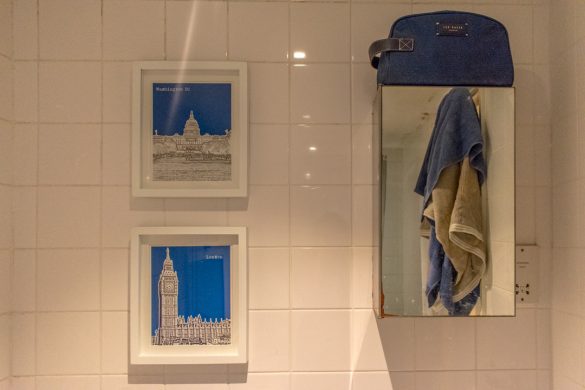 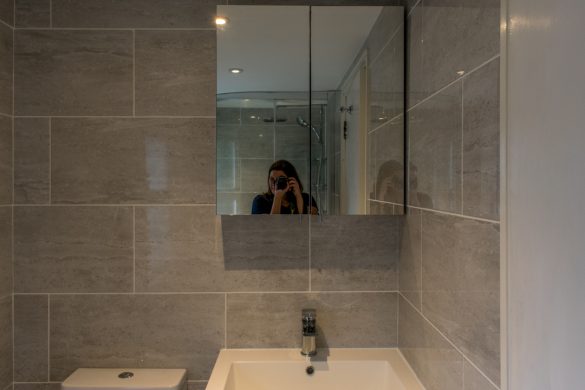 Since we sacrificed the shaving socket, we had room to put in a double medicine cabinet. Now, I can keep all of my beauty stuff in one place, which means I actually use it! Between the extra medicine cabinet storage and the storage beneath the sink, our bathroom renovation left us with so much additional storage. If you live in London, you know how much every bit of storage matters! With under-sink storage, we can store our guest towels, spare toilet paper, cleaning supplies, and the random bits and bobs that we don’t need everyday, like sunscreen and extra soap. 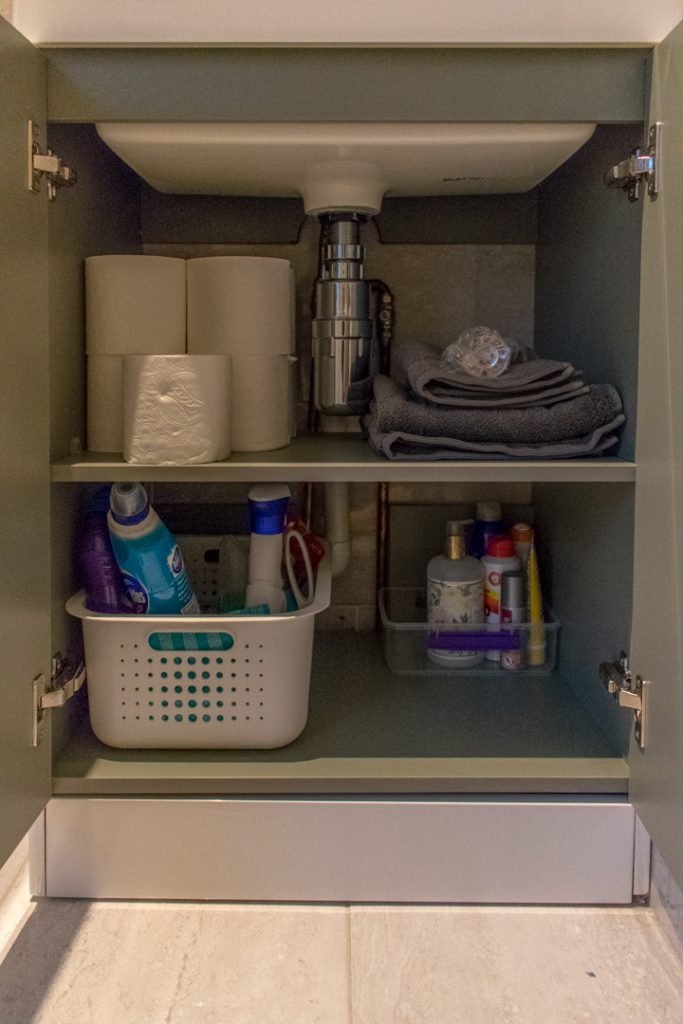 Due to the layout of the bathroom and where the pipes fall, we didn’t have much choice when it came to where our shower would go and what it would look like. We ended up flipping the shower, but keeping it on the same wall. This allowed us to put a slightly larger shower (900 x 1100) and, without the window in the way, build in some storage for our shower products.

Our contractor had to build some boxes on the floor in order to cover up pipes, but that’s something that we absolutely couldn’t avoid. By turning the shower, our bathroom feels twice as big, since the tub isn’t taking up over half the length of the room. 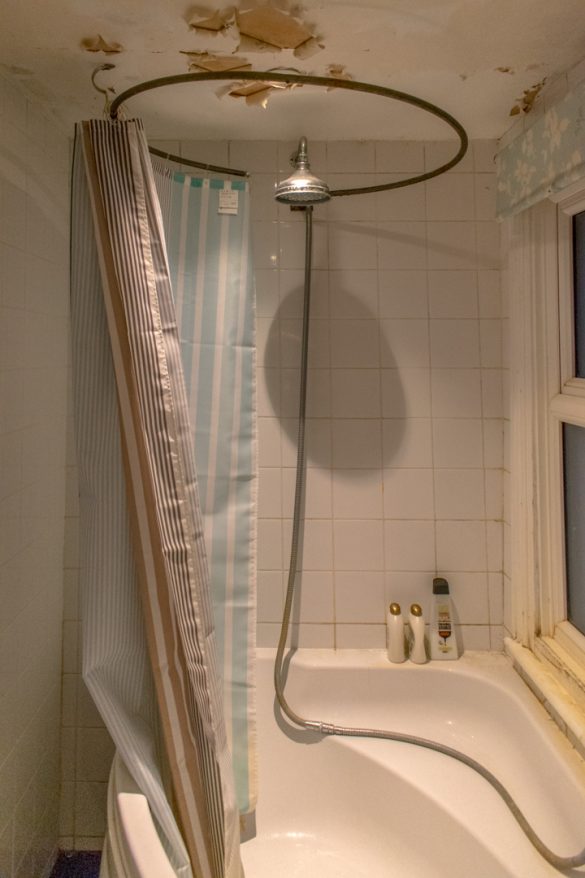 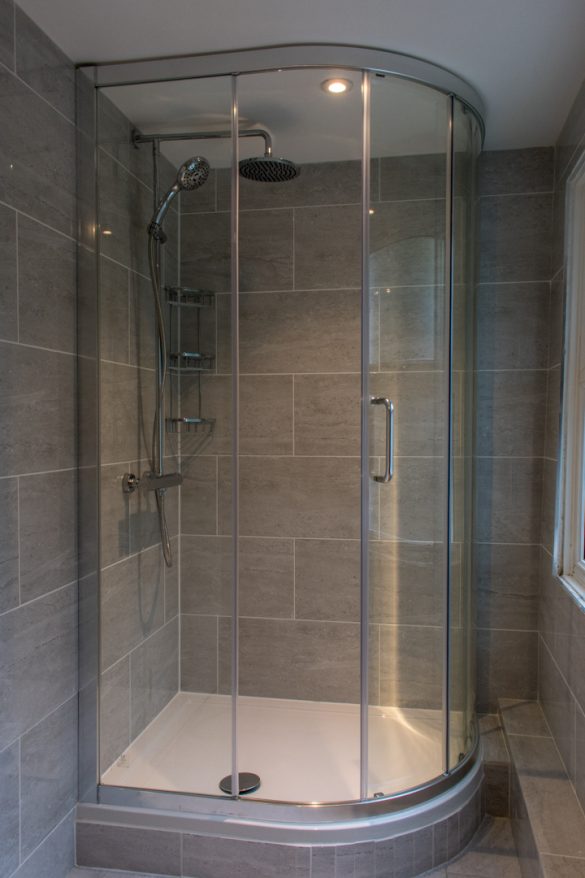 We used to only have room for shampoo, conditioner, and body wash in our shower. Even then, we were knocking the items over half the time. Since the only corner in the shower was against the window, we couldn’t build in corner storage and, because the shower head was part of a weird ring contraption, we couldn’t even add some hanging storage. For our new bathroom, we had a three level corner storage unit built in. Now I can keep everything I need in the shower (including our favorite shower cleaning spray!). 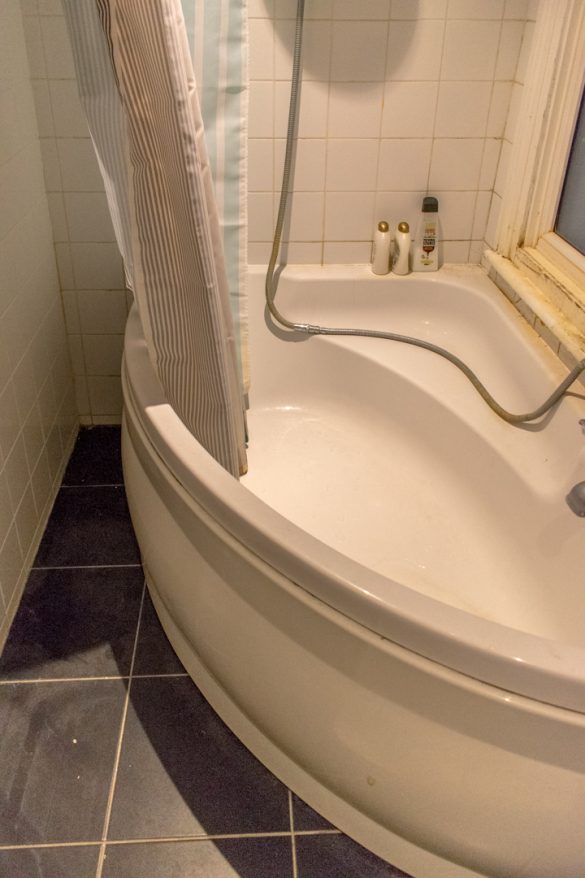 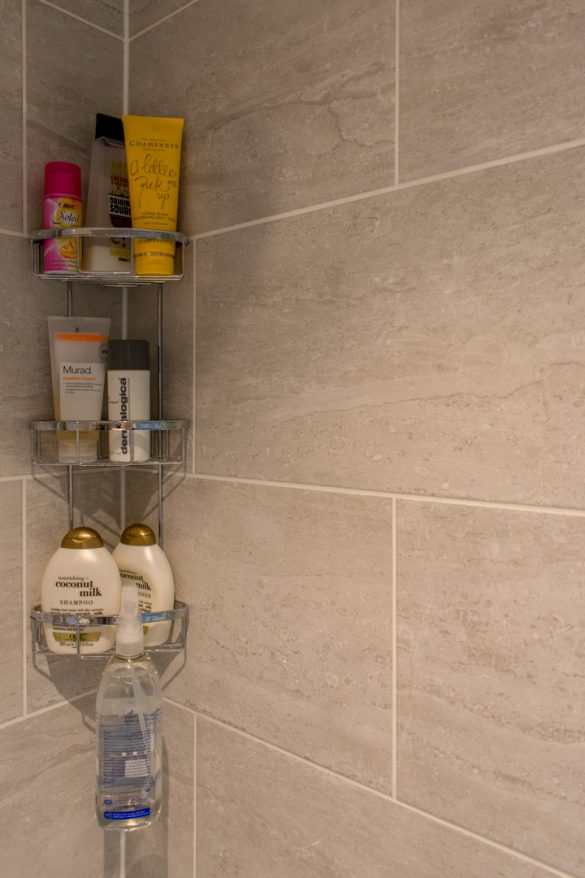 Our new shower head may be one of our favorite things in the bathroom. I love a good rainforest shower and the water pressure of this shower head is 1000x better than our previous shower head. I honestly get in the shower and never want to get out. It’s crazy to think that something like a shower head can completely change your life, but it has honestly impacted my entire getting ready routine! If you’re planning to do a bathroom renovation soon, I highly recommend prioritizing a rainforest shower! 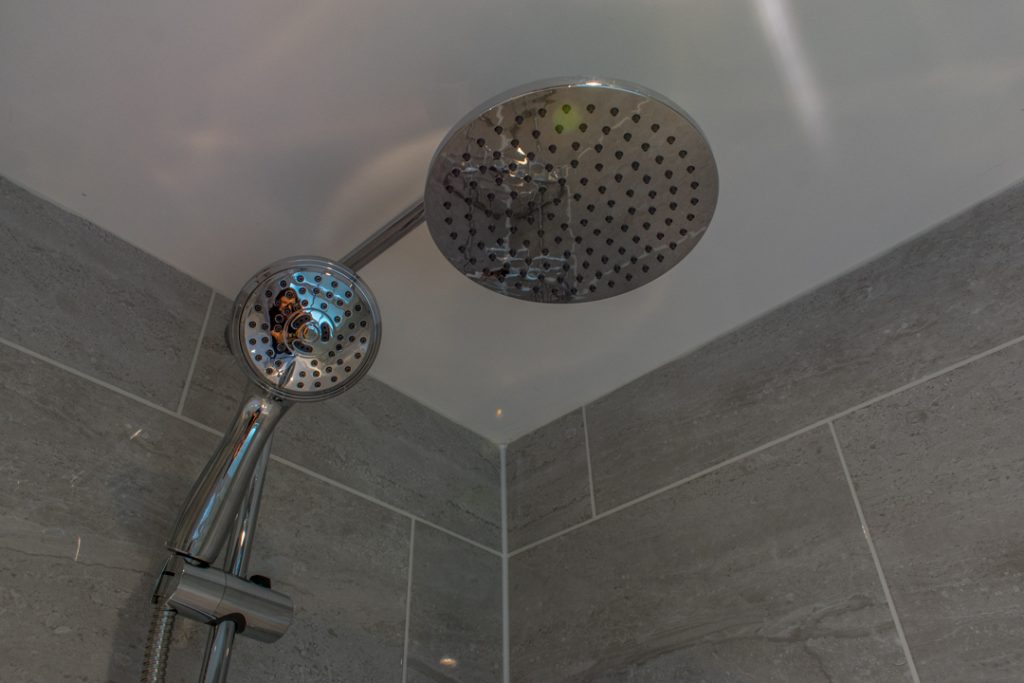 We know that, if we choose to continue living in London, we will never be able to have EVERYTHING that we want in our home. Living in a city, that’s near impossible. You either have to sacrifice space or quality if you want something that falls within your budget, no matter how much money you have. 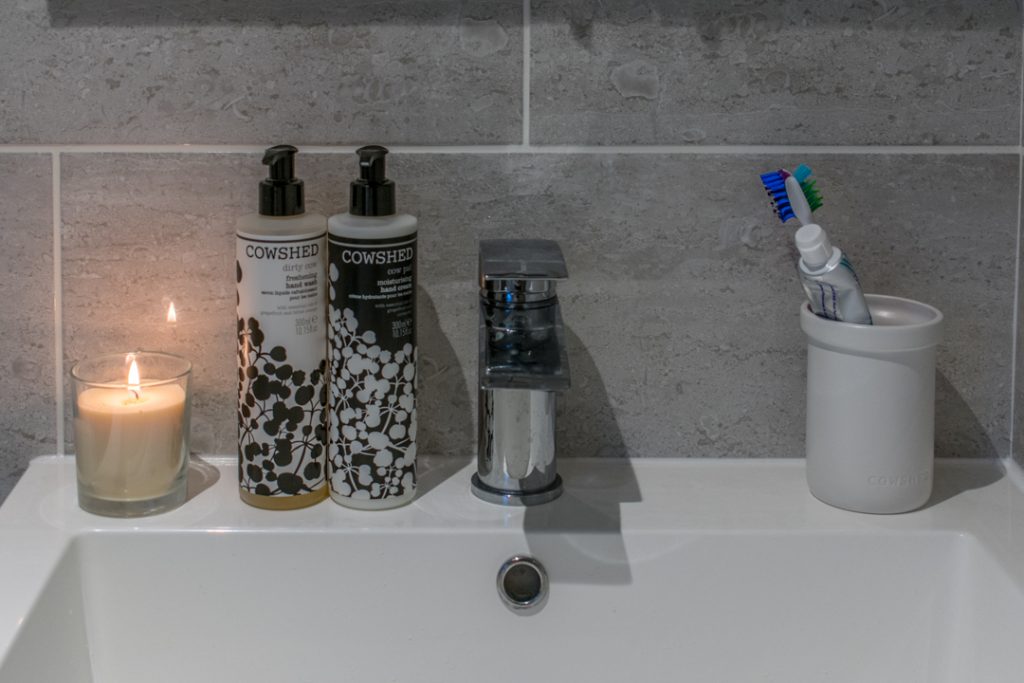 So we only have one bathroom. And we don’t have a bathtub for long, luxurious soaks with Lush bath bombs. But we do have a space that feels much larger and brighter and cleaner than it did when we first moved in. And we have enough room on our sink to display Cowshed hand soap and it’s matching lotion. And our shower head makes us feel like we are in a five-star hotel. This bathroom is, essentially, the perfect London bathroom. At least, it’s perfect for us!

Up next is our kitchen renovation, so keep your eye out if you’re looking for some home renovation inspiration. And drop a comment below telling me what you would prioritize if you were to redo your bathroom today!

Pin this to your Home Design board! 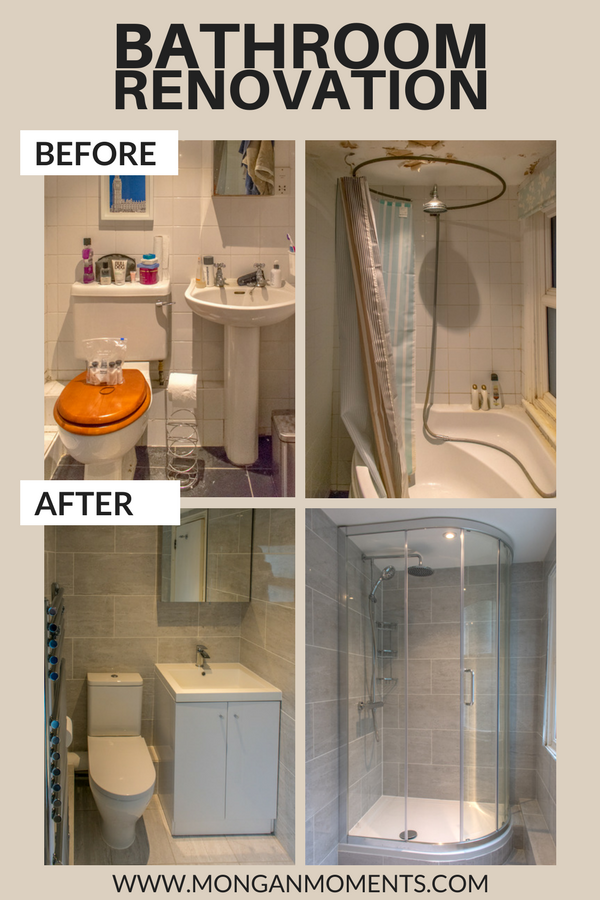 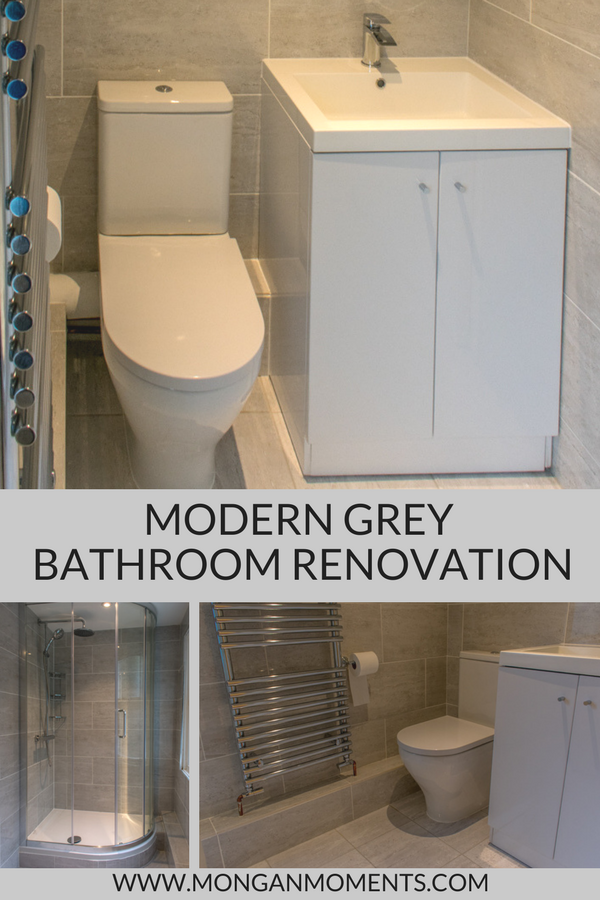 Our Kitchen Renovation with Howdens

this is incredible! i’m so obsessed. i love everything you guys did to transform your bathroom. enjoy it! xx

Amazing bathroom design. I like the color of the tiles. Looks modern and minimalistic. Great blog by the way.

Hello Kelly Mongan,
What a gorgeous design idea you share just fabulous. An incredible idea and amazing tips and tricks. I am very pleased to read this fantastic blog, please share more.

There’s nothing like upgrading a bathroom. Bathroom design is all about the details. A good layout is imperative to a functional bathroom, so that is usually where we start with the design. Tile plays a huge part in bathrooms, as well as plumbing fixtures. Bringing it all together into a beautiful result is the fun part.

A decent format is basic to a practical restroom, so that is typically where we start with the structure. Possibly I’ve missed this yet how would you paint over the restroom mirror and lights over the shower cupboards? It’s extremely educational. Much appreciated again for imparting this data to us.

Superbly written article, if only all bloggers offered the same content as you, the internet would be a far better place.You can also visit my blog in related to this post http://chathamhomerenovations.com/

Wow! What a fantastic job. You guys completely transformed that bathroom. Great blog and pictures. The information here is well written. Thank you for sharing Kelly!

I love your decision to change the tiles. it gives a vibrant color and welcoming feel. I will check with a local https://www.lewishambathroomrenovations.com/ if they can do the same.

I love the transformation just like https://www.lewishambathroomrenovations.com/ did to their client’s bathrooms.